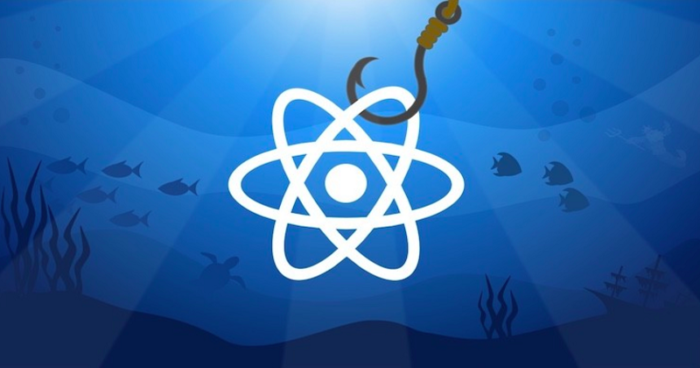 In React web development, the motivation proposals are the following:

The idea is giving power to functional components in the React realm.

With years of experience,  company like eTatvaSoft could state that the React framework is the best when it comes to developing fast and large web apps with JavaScript. Moreover, it enables the creation of interactive UIs, updates components in a smooth manner, develops new features without having to rewrite code, as well as dealing with SEO more efficiently, all thanks to the server-side rendering.

Embracing the use of React hooks would lower the number of concepts required to juggle when writing apps in the framework. The hooks allow the utilization of functions at all times, rather than switching from function to function, classes, higher-order components, and render props constantly.

Both functionalities of state and the state update come from the useState, a state hook that’s responsible for managing local data state that we would be fetching for the Application component. The initial phase is an empty hits list in an object representing the data. Nobody will set any state for the data rate.

We’ll be using Axios for fetching data. Nonetheless, it depends on you if you prefer to use another fetching library or even a native fetch browser API. If you have no Axios installed yet, you can install it with the command line, npm install Axios. You could afterward implement the effect hook for data fetching: 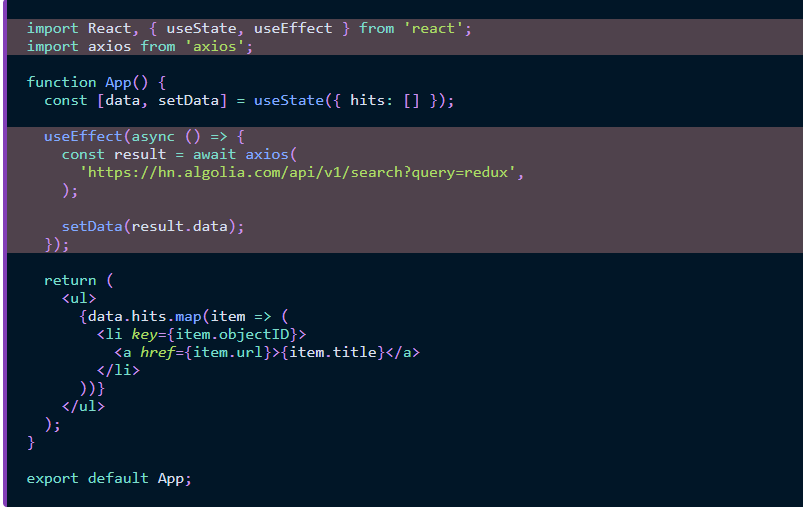 The useEfect, effect hook is used to fetch data from the API using Axios and set the data in the local state of the component with the update function of state hook. However, running an app could make you stumble into a nasty loop. Effect hooks run when the component mounts, as well as when a component updates. 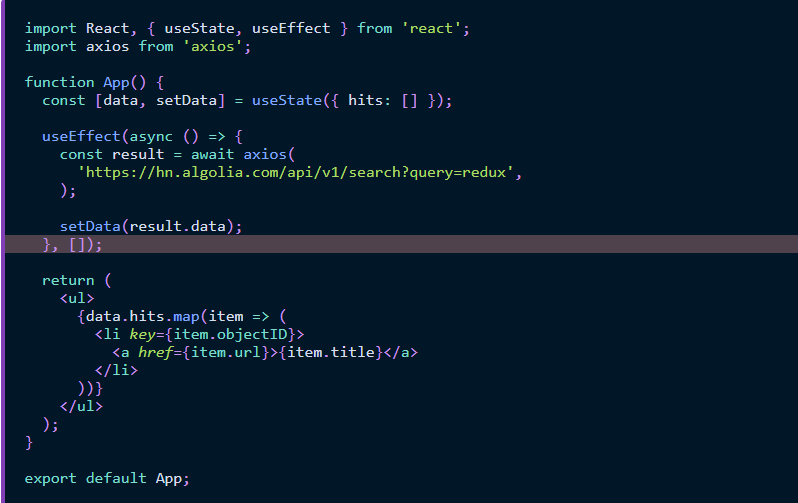 There is the last catch however. To get data from a third-party API in code, we would be using async/await. Based on the documentation, each annotated function with async will return an implicit reply. An effect hook however should not return anything, or what’s called as a clean-up function. Thus, it’s not allowed to use async directly in the useEffect function. We’ll do a workaround for it using the async functionality within the effect.

In a nutshell, that’s data fetching using React hooks. However, if you’re interested in handling error, how to load indicators, how to implement a reusable data fetching hook and how to trigger fetching data from a form, you should continue reading.

Let’s consider using an input field to tell the API the topic that we’re interested in. Be default query, Redux is used. Nonetheless, what about ‘React’ topics? What about topics on ‘React’? We will implement an input element to allow someone to fetch other stories, thus introduce a new input element state.

Both of the states at present are not dependent on each other. But we have to couple them to fetch only the specified input field query articles. The component of the following field must get all articles by the query term once mounted. 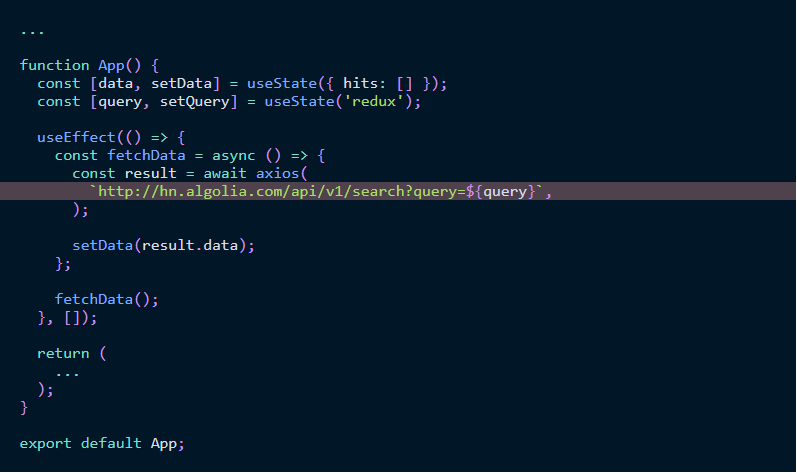 A piece is missing though. No effect will be triggered when you try typing something on the input field. This is because you have provided an empty array as a second effect argument. The effect will not depend on variables; thus it’s only triggered when a component mounts.

Nonetheless, the effect now should depend on the query. The data requests should fire again once a query would change. 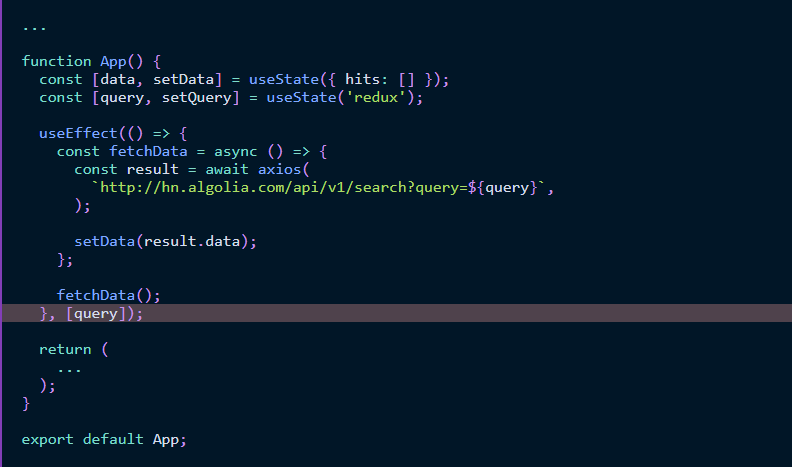 Once you change the value in the input field, data re-fetching should work. This however opens another issue, and that is: on each character that you type on the input field, the effect is triggered and would execute and get the data request. Provide a button that would manually trigger the request and so the hook.

Consider making the effect dependent on the search state, rather than the fluctuant query state that with every major stroke in the input field will alter. The moment a user would click on a button, it will set a new search sate and sort of trigger the effect hook in a manual manner. 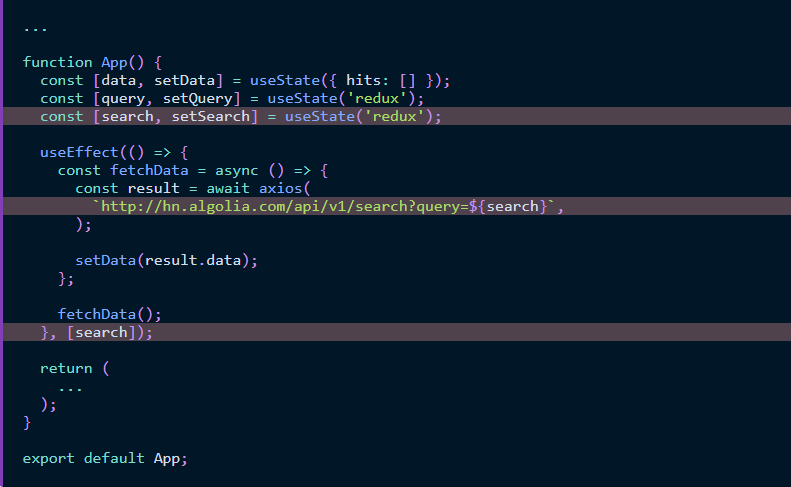 The same as the state of query state, the initial state is also set because the component fetches the data on mount as well, in which the result must reflect the value of the input field. Nonetheless, having the same search state and query could be confusing. We must try setting the actual URL as a state, rather than the search state. 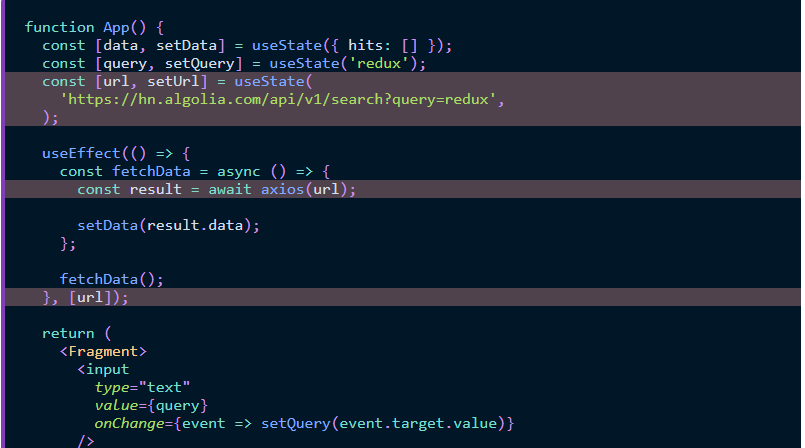 You get to learn how React Hooks for state and effects can be used to fetch API data.